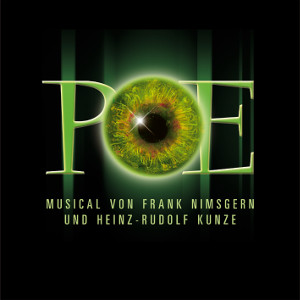 Info on this piece and performance rights at: franknimsgern@me.com

World premiere at the Saarland State Theater in 2004, new production at the Tollwood Festival in Munich in 2005. The main character and idea pool for this musical is provided by Edgar Allan Poe, the progenitor of all gothic literature. In seven pictures, which thematically follow Poe's most famous stories, the story of a fateful devil's pact is told: Poe, whose ghoulish obsessions drive him sheer madness, is promised healing by a mysterious Dr. Pilate, behind whom hides none other than the devil himself. If Poe leaves his cruel scenarios to the notoriously unimaginative devil, he will finally find peace from his delusions. Poe accepts - and unexpectedly finds himself in the whirlpool of his own fantasies, which now become reality.

Poe meets Madeline at the "Club Amontillado," where Pilate is revered as the "Master of the Night," and falls for her. Madeline, however, ignores Poe's vows of love, she is addicted to the great thrill - it is to be her last.

It comes to the show trial against Poe, Virginia - both fantasy being and real club owner - prevents Poe's conviction. But she loses the concession for her club. Its new owner is a poker king. Poe plays against him for the club - the game ends in a duel. Poe is hunted again - with Virginia at his side. They confess their love to each other. But later, Pilate wants Poe to sacrifice Virginia.

Poe, however, stands up to evil, refuses the ritual and cancels Pilate's pact. In a final duel between Poe and Pilate, Poe does not realize the "truth" in the nightmare: that he himself is Pilate. He shoots his enemy, and with him, himself.

Virginia takes leave of Poe and is sent by Pilate back to the realm of shadows from whence she came. Poe is dead. But neither good nor evil, neither Virginia nor Pilate, fail to pay him homage. Poe survives in his poetry.

Rights to Pictures by Frank Nimsgern Group This email address is being protected from spambots. You need JavaScript enabled to view it.